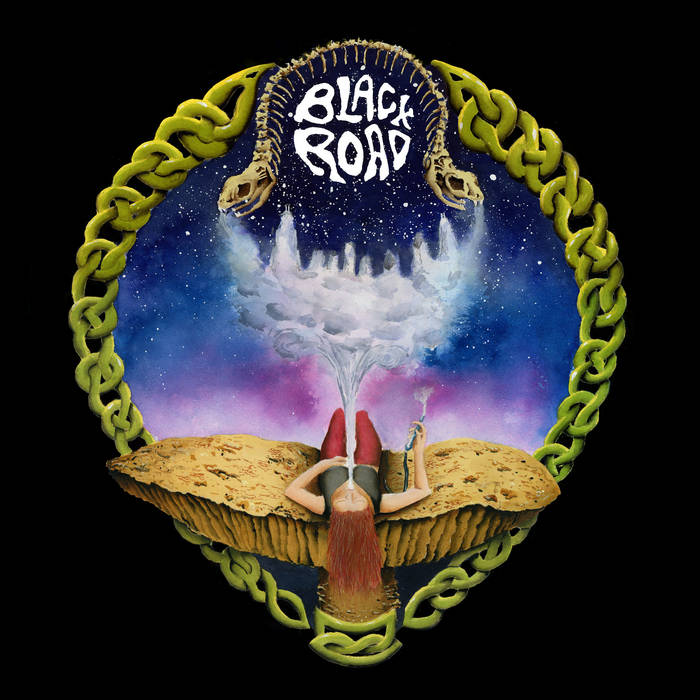 JWAR I love, love, love this band! It’s a perfect mix of old doom metal and new doom with a super talented singer! Hope to catch you all soon!!

Jonathan Harris Definitely a fan of many female fronted bands alot of the time . This one tops up there in my list like witch mountain , sex knuckle , actually too many to name but you are one of the bands in my playlists and repeated plays on a regular basis .

William Ring Wonderful classic stoner sound. So easy to get lost in some of these trippy jams. These are tunes to burn out too. Favorite track: Red.
more...

Black Road is a four-piece sultry stoner/doom band from Chicago, IL. Founding members Tim M. and Suzi Uzi write the riffs and lyrics, with Casey Papp (bass) and Robert Gonzales (drums) creating a heavy and harmonious rhythm as the backbone. Formed in the summer of 2015, Black Road has had lineup changes that have pushed the band to become stronger and more focused. Just before acquiring the newest members in fall of 2016, Black Road signed with DHU Records (Netherlands) for a vinyl and cassette deal. Later in early 2017, they signed with BloodRock Records (Italy) for the CD release.

After almost one full year of gaining their new bassist and drummer, Black Road was finally ready to reveal their self-titled debut EP. This album features two songs that had already been established by the previous lineup, and 4 new tracks that were created out of sheer inspiration. The album is a DIY labor of love - originally tracked and recorded by Suzi Uzi and Brad V Earl. The tracks were sent to Tony Reed (Mos Generator) at HeavyHead Recording Company in Washington to be mixed and mastered. Each song has a different feel, meaning, and place within the album.

The first single released to the public was track 2, "Bloody Mary" - the shortest lyrical song on the EP. A music video followed up the release, and gained instant popularity.

This single was also featured on "Doomed & Stoned in Chicago (2017)", alongside other Chicago metal and stoner rock bands. The mix for the original release of "Bloody Mary" is not the one which is heard on the Black Road EP. This older mix can be purchased as a single on Black Road's Bandcamp page (mixed by John Morrison and Suzi Uzi).

The second and final single released before the album went public was track 1, "From Hell".

"Daaaaaamn, BLACK ROAD have a bonafide hit on their hands with "From Hell." This is the first track from the Chicago rocker's upcoming EP, 'Black Road' (2017)." (BillyGoat - Doomed & Stoned)

"From Hell" was originally released within the compilation "DHU Records Sampler MXVII Vol. II", now available on Bandcamp. This sampler includes songs from bands currently on the DHU Records roster.

"Red" (track 5 on the EP) can be described as "the song that started it all". The original demo recording released by Black Road in early 2016 caught the eyes and ears of DHU Records. Feeling an immediate connection with the head of the record label, Black Road knew they wanted to go with DHU for the first release. "Red" has evolved and gotten heavier - just like the entire band.

Closing out the Black Road EP is track 6, "Black Rose". This is the longest song on the entire album, and can almost be considered the grand finale ballad. The outro of this song incorporates live audio captured by Suzi after a storm.

"Thank you to everyone who helped us make our dreams come true. We hope you enjoy our debut EP, and we look forward to many more songs and releases to come!" - Black Road 2017.

Track Name: From Hell
Take away all of the green in life
And we pay the ultimate price

Hell, you are from Hell

Hell, you are from Hell
Track Name: Bloody Mary
When darkness strikes
She comes scratching
Ripping the flesh
Drawing your blood

Bloody Mary
Track Name: Red
He wasn't wealthy
Not a well-off man
He worked hard
Did the best he can

Bright Red dreams
Track Name: Black Rose
In the garden so peaceful, where the beautiful things all grow
The solstice begins so slow and the signs of winter will show

Days become shorter and the sun seems unsure
The clouds have gone now, leaving only the starless azure
In the morning shall come rebirth of the sable's prey
But in the glow of that light we start to see the decay

For this is bittersweet, with death comes new life
No amount of grace could prevent this strife

Bandcamp Daily  your guide to the world of Bandcamp